When you begin at a new job, you likely have the intention of eventually graduating on to bigger, more distinguished roles somewhere down the road. After all, a career is about progression ‒ as you become a more accomplished, well-rounded professional, you advance in your career.

That's the experience that our CV makeover winner, Allen Rhodes, has had. Epitomising what it means to move up the ladder, Allen has spent almost 14 years with the same company, beginning as an accountant and working his way up to a senior-level leadership position. However, after a steady climb up the ranks, Allen found himself ready for a bigger leap, and when a top position opened up at another company, he was quick to put his hat ‒ his CV ‒ in the ring.

Armed with all the necessary skills and experience (and then some), plus knowing he was a good fit for the role, Allen began his application process with high hopes. After submitting his CV, he was already looking forward to the next steps … but his inbox remained empty and his mobile remained silent. After some time, it became clear to Allen that he was not being considered for the role.

After taking a good look at his CV, Allen recognised that it may not have been up to the level it needed to be. Moving through internal roles for years had been undoubtedly rewarding, but it had also given him a way to move through his career with a CV that wasn't particularly polished. When the time came to pursue a position at the top, that scarcely updated CV lacked the executive formatting and positioning needed to contend for a role at that level. 'The higher up you go, the more they expect of you, and that goes for your CV as well', he told us in realisation. Despite being highly qualified and the right fit for the role, Allen's CV wasn't doing him justice ‒ it didn't sell him like the experienced professional he is and thus hurt his candidacy.

'The higher up you go, the more they expect of you, and that goes for your CV as well.'

A next-level job search calls for more than an average CV. After all, if you've excelled in your career and have everything you need to move up, it won't matter unless your CV reflects that and fulfils the expectations of HR managers looking for their next leaders. 'When you fly so close to the sun, you want to get back there again', Allen shared. With this fuel and newfound understanding of the importance of his CV, Allen submitted for TopCV's makeover contest ‒ and won! 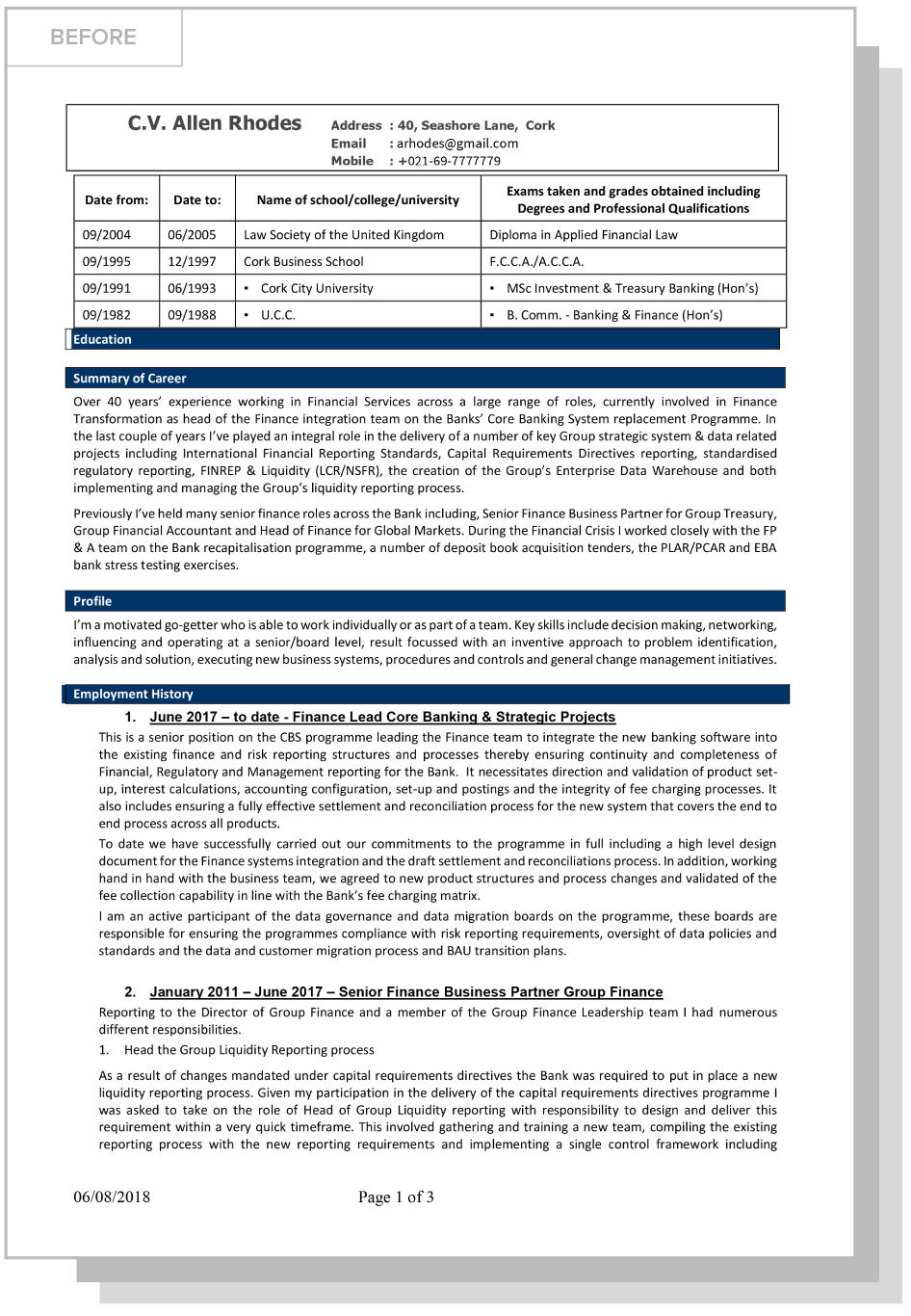 Allen was paired with TopCV professional writer Traci, who saw the potential in his original document. 'Allen started with great content', she told us, 'but it was very dense and difficult to skim.' Much of this had to do with the CV's bulky design format, which made it difficult for a reader to find the information they were looking for. Also, while Allen was wise in his approach to separate his CV into sections, the way he did this resulted in a wordy document that exceeded typical page-length guidelines.

'Allen started with great content, but it was very dense and difficult to skim.'

Traci took a number of steps to address these faults in Allen's CV. She explained: 'I replaced the dense paragraphs in Allen's employment history with a paragraph-and-bullet format, which makes it easier for hiring managers to distinguish Allen's accomplishments and projects from his overall responsibilities.' She also consolidated his Career Summary and Profile sections, removing unnecessary text and making room for a more impactful Areas of Expertise table.

Finally, Traci reorganised Allen's Education section, placing it at the end of his CV rather than at the top. At this stage of his career, Allen's professional history is more important than his education from decades ago, and should be what takes centre stage. Removing dates here is an added bonus, defending Allen against any inadvertent age discrimination that could be stirred by the dates of his time in university.

Related: How to write a powerful executive CV 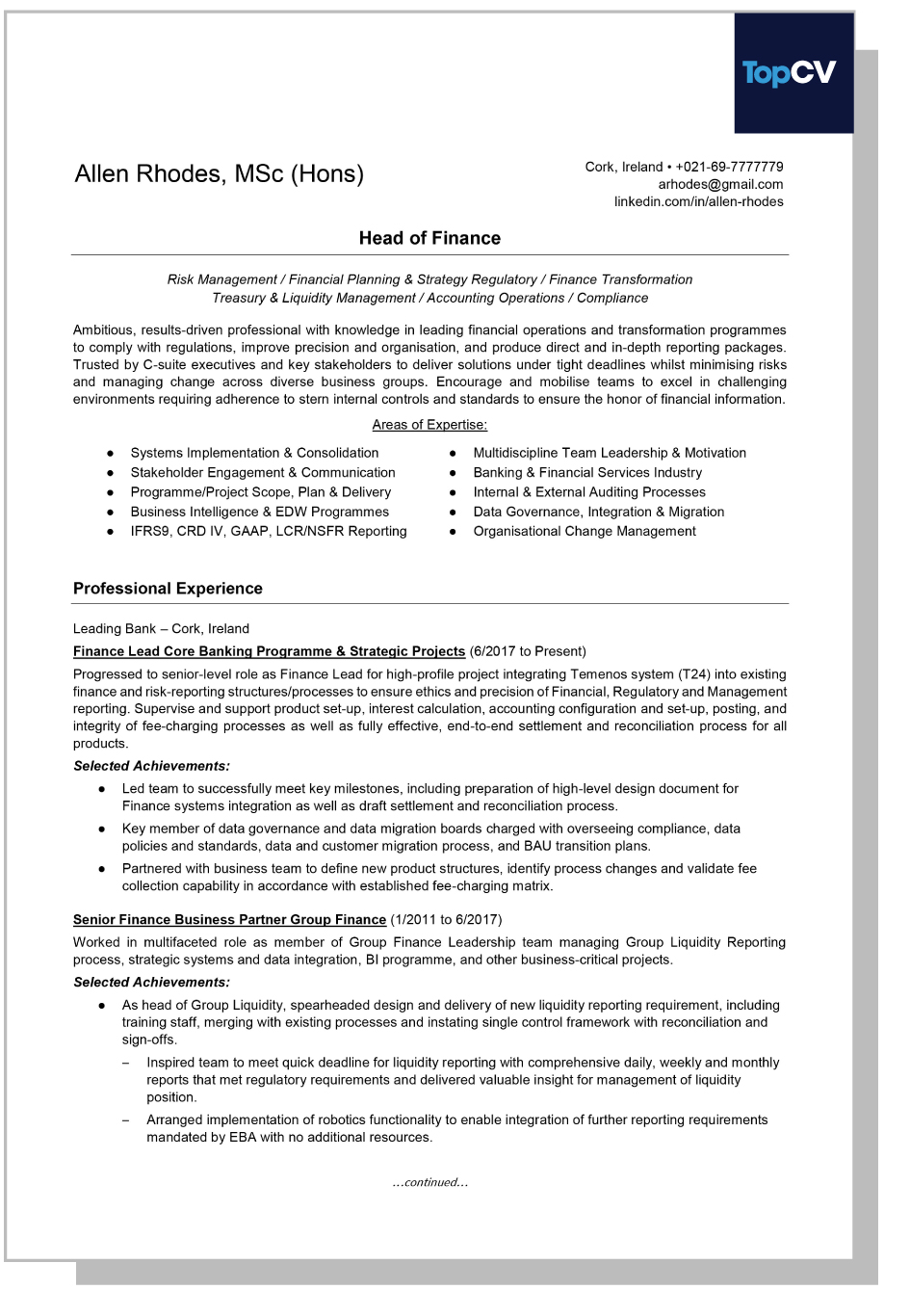 Understanding (and owning) your value

Going into the CV makeover, Allen didn't know what to expect. He submitted his CV curious about the impressions it would have on another person and wondering how they would interpret his representation of his career. 'It turns out I've done a lot more than I thought I had', he told us.

'Maybe it's a cultural thing ‒ us Irishmen are always underrating ourselves. But when I received my draft, it made me feel brilliant ‒ like I'm the best thing since sliced pan.'

'It turns out, I've done a lot more than I thought I had.'

When asked about his makeover process, Allen shared that he had learnt a lot about what makes a strong CV. Of course, there were the major changes to his CV's format. However, Allen's biggest takeaway was a lesson in the power of the right words on a CV and what a boost of confidence can do. 'They are words I wouldn't have used myself, but maybe I should be a bit more bullish about my own skill set and abilities. If I believe in myself, why shouldn't I write it down?'

When you're aiming to leap up the ladder, it's imperative that you showcase your best self. With a skilled pair of eyes coupled with an expert knowledge of CV writing, a professional CV writer is ready to do just that ‒ to accurately take your already-superiour background and translate it to a CV that's as impressive as you are.

Expertise or magic? The story of our CV makeover winner