As she celebrates 70 years on the throne, TopCV looks back at the life and work of Queen Elizabeth II

It's Queen Elizabeth's Platinum Jubilee this year and for most of us, Queen Elizabeth II is the only monarch we've ever known. She's been the steadfast female on the throne, the longest reigning British monarch ever in the history of the UK. With plenty of transferable skills, Queen Elizabeth has shown true dedication, loyalty and a hard working attitude throughout her working life, whilst having to deal, in a dignified manner, with errant members of her immediate family while constantly under the spotlight.

Her work ethic is unsurpassed, as demonstrated by her CV below. While most of us like to perfect the work/life balance, up until recently, Her Majesty has been on constant call and display – shaking countless hands, watching numerous welcome dances, looking interested while talking to the public, and generally displaying diplomacy and effective communication skills wherever she goes.

OK, so there are some people who might say that she lives a privileged life. She certainly hasn't had to source a job through LinkedIn or any of the other job boards. But she was born into it and didn't have a choice, unlike the rest of us who are free to select which career path we want to go down.

The saying goes that you are only six handshakes away from The Queen, which proves her wide influence across the globe. But what exactly does the Queen of England do? While she has no legal power, apart from appointing the Prime Minister after a general election, Queen Elizabeth does perform many tasks on behalf of the nation, all of which can be included in different areas of a CV. Official state visits are high on the list, as are her government duties – reading and signing the red boxes which she receives every day. As Head of the Armed Forces, Her Majesty is the only person who can declare the country is at war.

So to celebrate the Queen's jubilee and 70 years of service to the UK and the Commonwealth, TopCV's Blogger and CV Consultant, Elizabeth Openshaw, has put together a comprehensive CV. This showcases The Queen's extraordinary achievements and lifelong commitment to her role in her Platinum Jubilee year. 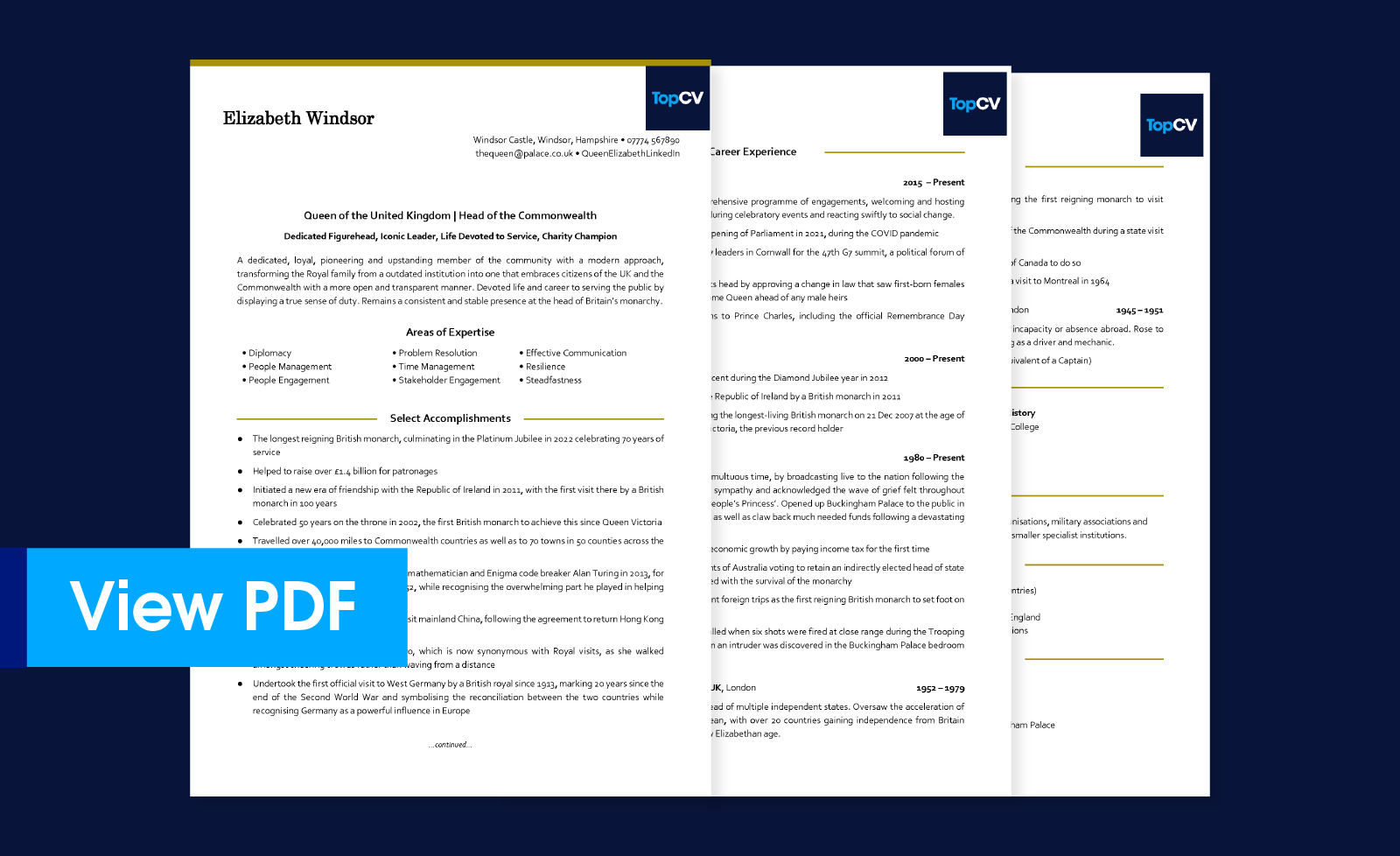 We can't all have the privileges of The Queen as she celebrates her Platinum Jubilee, but we can help when it comes to transforming your CV into the best possible document it can be. Ask us for a free CV review, to transform your CV into a document fit for a Queen.

How to write a graduate CV like a seasoned pro

How to write a receptionist CV

How to write a marketing CV